Spring houses are the unsung heroes of early American rural life. Given that water is the substance of life (next to a good merlot), the spring house should receive its due respect and recognition. There’s no better place to start than right here in our own neighborhood. What eventually evolved into the modern refrigerator, a farm’s spring house provided potable water for drinking and cooking as well as a cool enclosure for food preservation and storage — and a respite from summer chores. Our forebears may have even kept a jug of hard cider in the spring for “medicinal” purposes.

Although spring houses were usually the smallest of farm outbuildings, they were the most important because of the products and services they provided. Most were purely functional, but others on the plantations of the more prosperous were substantially larger and often contained ornate architectural elements.

All early Ruxton and Riderwood farms would have had a spring house. It was a necessity of doing business. At the turn of the century, when electricity became available, spring houses fell into disuse. Most were either abandoned, torn down or converted to storage. With the interest in historic preservation, many have been restored and are now attractive ornamental features. Several spring houses in our area are actually still working, a tribute to their current ownership. Sitting adjacent to or on a spring, water coming up from deep in the ground is channeled into a trough and carried around the interior of the structure. In the trough are placed tin, clay or ceramic containers of vegetables, fruits, cheese or other farm produce. 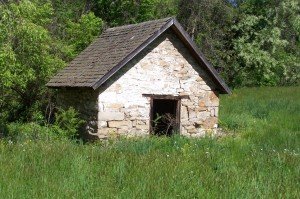 Louis J. Roberts spring house – This humble but proud early 19th century spring house awaits preservation off Wine Spring Lane. It is on the site of the earliest settlement in Ruxton.
The circulating spring water would thus cool the building and the containers permitting preservation at least for a period. If possible the spring house would be placed into the side of a hill or constructed into the ground with the earth acting as a further insulator. Usually a lime whitewash would be applied to the outside to deflect the summer sun. Most had a one- to two-inch internal wall covering of crushed limestone slurry and animal hair, as a binder, to further insulate the structure. The internal temperature of a spring house on a hot summer’s day could be 15 degrees cooler than the air outside.

Many Ruxton and Riderwood spring houses exist today. They are on private property but can be seen from a distance. Most are taken for granted. If it weren’t for the spring house, our community would be far different than it is today and so would we.