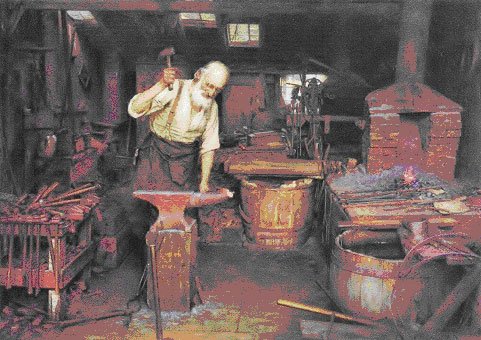 In 1835, after the Baltimore and Susquehanna Railroad cut through the rural Roland Run Valley, a small, piece of land found itself caught between the railroad and the now Bellona Avenue, formerly Powder Mill Road. This is the site of the Citgo station just south of Malvern. The one and a third acre parcel was purchased by Thomas Ford from Philemon Coale for $115.00.

In the deed transferring the property, the site was identified as being on “the country road from Ed Rider’s mill to the Bellona Gunpowder Works.” Here, Mr. Ford established a black smith operation. By 1850, Thomas now 65, his wife Elizabeth, 56, and daughters Augusta, 19, and Louisa, 14, were well established. The property was valued at $500.00. The shop continued to stay in operation for a number of years servicing the farming, milling, and the many coaches and wagons of the growing community.

It’s challenging to imagine this site as more than just another contemporary gas station. No pictures of the smithy exist that we know of, but it must have been a standard operation for its day with a flaming forge, heavy breathing bellows accompanying smoke and sparks. Certainly, it was a destination spot where neighbors would gather to discuss news of the day and local events now long lost to history. It was a good vantage point to view the troop trains headed south for the Civil War and Lincoln as he passed by on his way to the Gettysburg battlefield dedication in November of 1863.

Our neighbor to the south-east, on what was called the York Road Turnpike, took the name of its local smithy, George Rodgers, and is now known as Rodger’s Forge. If we were to have followed the same course in naming our community, it would now be called Ford’s Forge, a little bit of a tongue twister — I prefer the wisdom of our predecessors in choosing Ruxton.